Hélène Darroze at the Connaught, London 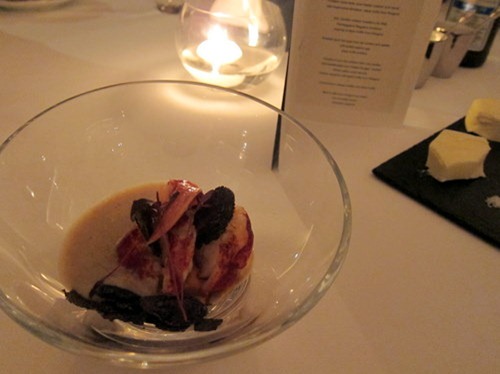 I last visited Hélène Darroze at the Connaught two years ago, and left thoroughly gratified. The cooking was of the highest order and it was not difficult to see why this Ducasse protégé was held in such high regard in her native France; her Paris restaurant the proud owner of 2 Michelin Stars at that time. The Michelin guide has since bestowed upon her London outlet a second star (but took one away from her Paris restaurant last year), making Darroze the only female chef in London to hold two stars. Expectations for this meal were therefore, naturally, very high.

Unfortunately the much publicised ‘white-truffle-at-cost-price’ menu was no longer available as it was too late in the season, so we opted instead for the Black Truffle Signature Menu at £125 per person. The first two courses: 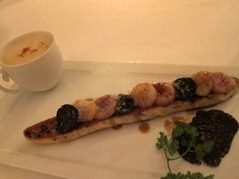 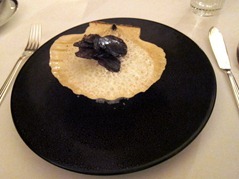 were well put together, tasty, and complemented well by the Périgord black truffles. Neither was an outstanding dish but they made for a pleasing enough start to the meal, and promised of even better things to come. The next course, XXL Scottish scallop roasted in its shell, Parmeggiano Reggiano emulsion, shaving of black truffle from Périgord, continued the theme of pleasant but unspectacular dishes, as, almost half-way through, we continued to await a course that would elevate the meal to the next level. Regrettably, no such dish was to be forthcoming this evening. The next two dishes, the latter the main course: 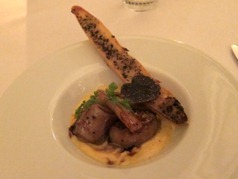 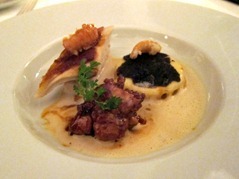 were the most underwhelming of the night. The foie gras dish was poorly conceived – the richness of the foie gras and the heaviness of the egg drowning out the flavour of the truffle and making for a very cloying plate of food. On my first visit, I had Darroze’s signature chicken dish as part of the tasting menu and was very impressed. It is extremely rare to see chicken as the base for a signature dish mainly because it is a rather boring, common meat – the signature dish that evening was a revelation, the chicken wonderfully seasoned and cooked to a perfect moistness. The main course this time (different in composition to her signature dish, but still using chicken as the primarily meat) was a poor imitation – the chicken dry and tasteless.

The cheese course, Coulommiers cheese stuffed with black truffle, and the dessert course, Black truffle from Périgord ice cream, hot chocolate sauce, chocolate spaghetti were probably the best of the night but by this time the die had been cast. 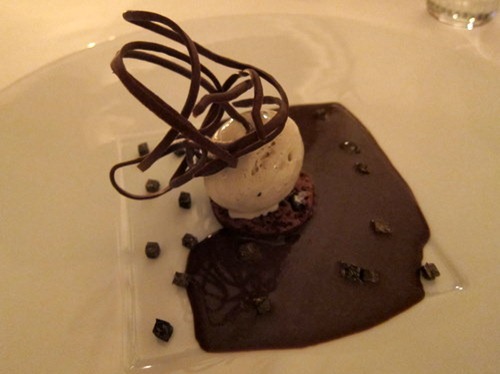 In a nutshell…
Highly disappointing. The meal wasn’t bad, but it didn’t come close to meeting the standard one would expect from as highly decorated a restaurant as this. On the basis of this evidence, definitely not deserving of 2 Michelin Stars.