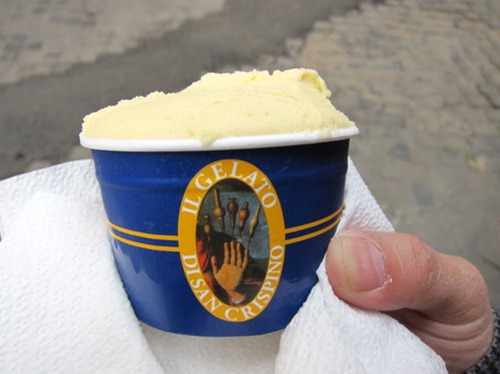 In a city lined with gelato shops at practically every street corner, Il Gelato di San Crispino is considered by most to be the very best, even getting a mention in Elizabeth Gilbert’s bestselling-novel-turned-major-Hollywood-motion-picture, Eat Pray Love.

San Crispino has a number of branches (some of which are franchises) - we went to the one on Via della Panetteria, just round the corner from the Trevi fountain, which only does takeaways. I was very surprised by the lack of any queue whatsoever on the day of our visit – given San Crispino’s reputation, and fame, I was told to expect, and fully braced myself for a lengthy wait. Quite the opposite – it was completely deserted.

I had my usual Hazelnut and Pistachio, but also had to try San Crispino’s signature Honey. I was immediately struck by how different San Crispino’s gelato was – it had a rough, almost flaky texture, in stark contrast to the silky smooth ice cream at both Giolitti and Ciampini. I didn’t like it. When it comes to ice cream, I am most assuredly partial to the smooth variety. As for the flavours of the ice cream, I was less than enamoured by the signature honey – it was too sweet, even allowing for the fact that it was honey flavoured, and nothing all that special. The strength of the honey over-powered the hazelnut and pistachio so I couldn’t really even tell you how they tasted.

In a nutshell…
San Crispino’s flaky-textured gelato might be for some but it certainly wasn’t for me. For that reason, I had to rank it a distant third behind the other two gelato places I tried in Rome on this trip, Giolitti and Ciampini.