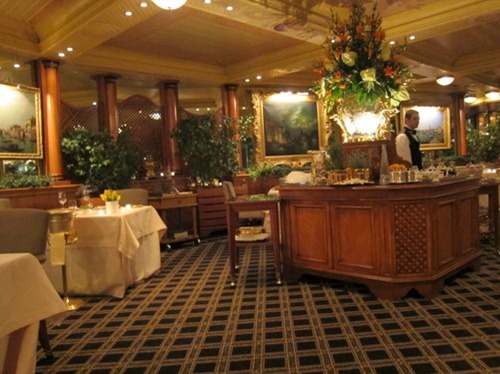 German Heinz Beck’s La Pergola, the only 3-Michelin-Star establishment in Rome, is widely recognised as the best restaurant in the eternal city. Everything about it is grand - from its location in the Cavalieri Hilton atop the Monte Mario, boasting some of the best views in town, to its shiny, ostentatious interior, to its prices – the 6 course gourmet menu (which I went for) is priced at €175, the 9 course at €198. I didn’t care much for the décor – it was loud and gaudy rather than elegant and classy, but I was nonetheless very much looking forward to the meal, filled with suitably high expectations. 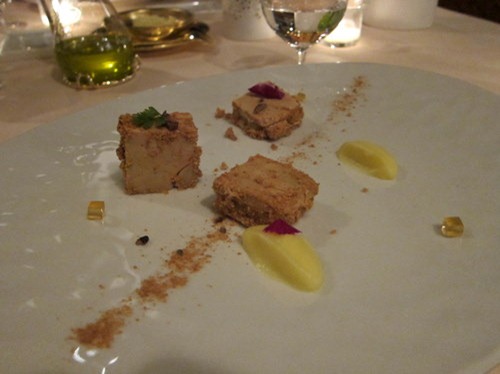 The first course was a Duck foie gras with apple, almond and amaretti. The meal could not have gotten off to a better start - it was a spectacular, stunning, outstanding dish – a terrine of foie gras, loosely coated in amaretti crumbs, sandwiching cubes of apple, completed with an almond puree. This was a brilliantly conceived dish – the juicy apple providing the perfect counter-balance to the smooth-as-silk foie gras, with the amaretti crumble giving an additional textural dimension to the plate. Foie gras and apple is not an unusual combination by any means, but this dish was especially ingenious because of the use of thicker cubes of apple rather than the more common thin slices, and by incorporating the apple within the terrine – both twists allowing the acidity of the apple to balance the foie gras perfectly, rather than be overpowered by it as is often the case. I’ve never had a foie gras dish that wasn’t at least a little bit cloying – not only was this dish not cloying at all, it was actually refreshing. The use of the crunchy amaretti too was a very clever, and unique touch, elevating the dish even further. It was, beyond any doubt, the best foie gras dish I have ever had – and I’ve had a few.

After a first dish that good, it would have been nearly impossible for the courses following to maintain the same standard. However, the drop-off was considerably steeper than I would have expected. None of the remaining dishes, though all technically excellent (apart from the pasta that was a little too al dente for my liking), displayed anywhere near the same level of creativity or balance of flavours evident in the foie gras dish. 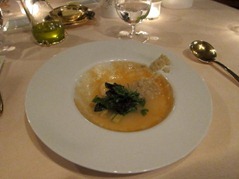 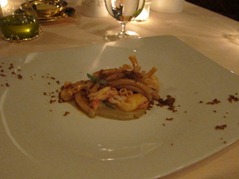 Infusion of Parmigiano with avocado, herbs and poached quail egg was weak and forgettable. Wholemeal "maccheroncini al ferretto" with red shrimps, smoked aubergine coulis and croutons was decent but not spectacular. Black cod with celery sauce and curry crust was cooked perfectly but no curry flavour was detectable. Veal cheek with curly endive, burrata and chilli flavoured popped rice was beautifully tender but not special. 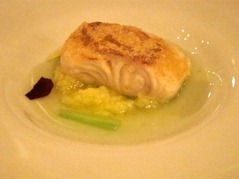 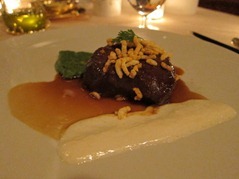 I also failed to see the attraction of the restaurant’s signature dish Fagottelli “La Pergola” (not on the gourmet menu) – the pasta was of a good quality, but bettered on this trip by Le Jardin de Russie, and the twist of encasing the carbonara sauce within the pasta, creating a bit of an ‘explosion’ in the mouth when bitten into, was mildly creative but no more than that.

The tasting menu concluded with a Grand dessert, a sampler of a number of the restaurant’s deserts, of which the standout was the tiramisu – light and delicate, it was excellent. Also worthy of mention was the Raspberries “au gratin” with almond ice cream – a clever preparation, but it literally tasted like cough mixture. 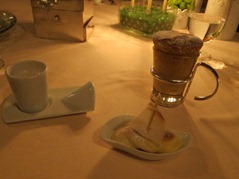 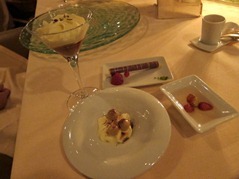 The petit fours actually turned out to be one of the highlights of the meal, presented in a tower with ‘secret’ drawers on all four sides, each containing a little ‘surprise’ – it brought the meal to a close on a bit of a light-hearted note. 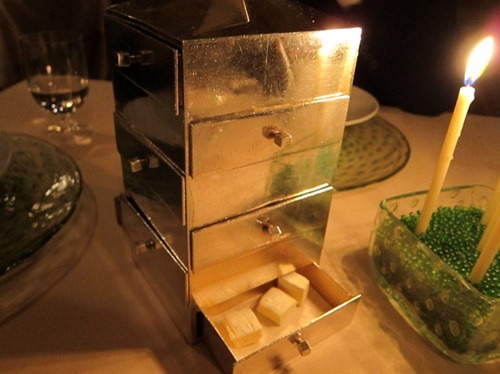 In a nutshell…
The superlative foie gras dish stood out, but the rest of the meal disappointed hugely, especially considering La Pergola’s reputation, and its prices.