La Taverna dei Fori Imperiali is very conveniently located on a small side street just off Fori Imperiali - the main road, flanked by the Roman and Imperial Forums on either side, that joins the Colosseum to the Monument to Vittorio Emmanuelle II. That is just about the only thing going for it, however, despite many reviews claiming it to be a bit of a hidden gem in an area full of tourist traps. 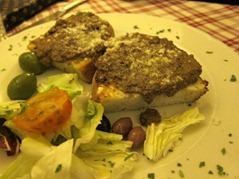 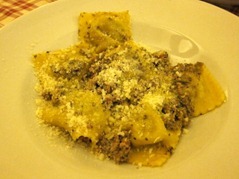 An antipasti of Toasted bread with Tuscany style liver pate to share, and their special (the specials are supposedly the best thing there) of Veal Raviolli with Truffle and Ricotta were rough and unrefined – not necessarily a problem for classic, rustic cooking as this professes to be; but they didn’t taste very good either, which is a problem. Service was friendly and attentive enough.

In a nutshell…
Perhaps this really is the best restaurant amongst the tourist traps near the Fori Imperiali – I can’t help but suspect there must be something at least a little bit better out there though. On the basis of this evidence, reviews touting this as a destination restaurant (there are actually quite a few) are well wide of the mark.