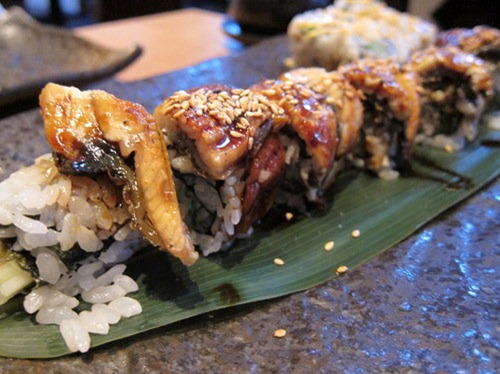 A really good, centrally located, reasonably priced Japanese restaurant remains the ever-elusive holy grail for this writer. Recently-opened, well-reviewed Nizuni on Charlotte Street was the latest in a long line of contenders. 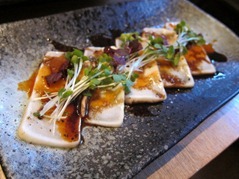 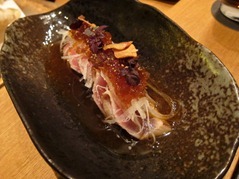 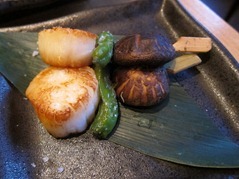 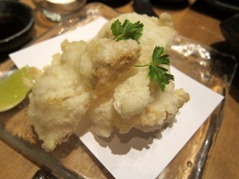 At this point in the meal, service ground to a halt, and our last two dishes took an age to arrive so much so that, conscious of the fact we only had the table for 2-hours, we decided to order a few more items then, rather than wait and see how we felt after the remaining two dishes. We added Tuna Tataki: seared akami, daikon, benitate ponzu jelly, Hirame Chips: deep fried thinly cut turbot and Chicken Gyoza: pan fried chicken gyoza, all of which arrived almost immediately, and before the two dishes we were still waiting for. The Tuna Tataki was easily the best of the three, well seared tuna combined with a slightly sour ponzu jelly to make a pleasing, tangy dish. The Hirame Chips were nicely deep fried, but completely tasteless – it definitely could have done with some sort of dipping sauce. The gyoza was inferior to the versions at Yoisho and Sakana-tei. 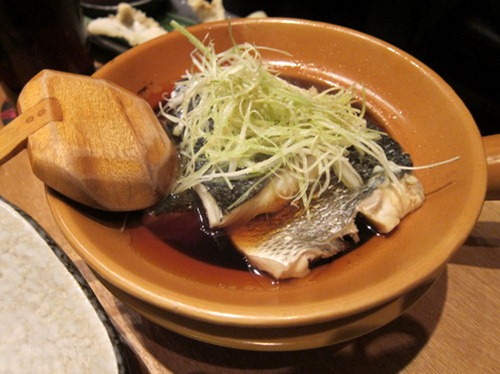 The final two dishes, Suzuki In Pot: steamed seabass in dashi with daikon pakchoi and Nibuta: slow cooked pork belly, Korean miso sauce then finally arrived. The Suzuki In Pot was lovely – beautifully steamed fish in a delicious soy dashi. It was, however, something I would expect to (and can easily) get at a Chinese restaurant, rather than a Japanese one. But nevertheless, it was done very well here. The Nibuta was also very enjoyable – delightful smoky, fatty belly pork slices with an appetising sauce – perfect with rice. Again, not a traditional Japanese dish - the influence of the restaurant’s Korean owners (who also run the Korean restaurant, Koba, just around the corner on Rathbone Street) clearly in evidence, but a successful one nonetheless. 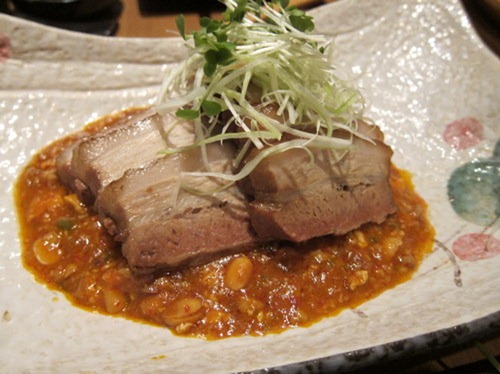 As it turned out, the restaurant had no need for our table after the 2 hours we were allocated, so we were able to linger. We shared a dessert of Chestnut Cake with Green Tea Ice Cream: moist chestnut heart green tea ice cream which was reasonably nice – good texture and chestnut flavour to the cake, not great matcha ice cream. 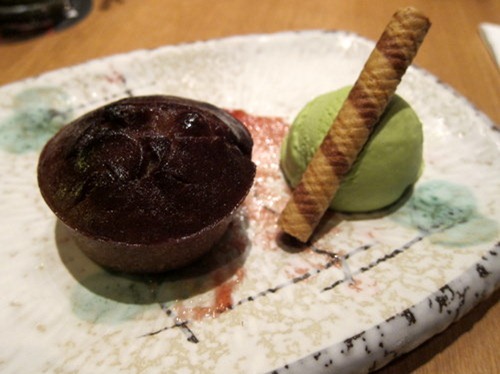 We had a lot to eat this evening, over-ordering in part because of the long wait for the last couple of dishes to arrive, but, with a 30% discount on toptable, the meal still only cost £40 per person. A filling meal can easily be had here for around £30-£35 even without a discount, which makes it pretty good value.

In a nutshell…
Not bad. Definitely not the holy grail, but decent enough. Doesn’t compare favourably to nearby Yoisho, Kikuchi or Tsunami, though.