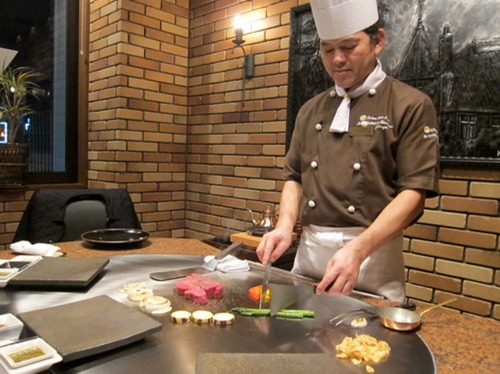 Kobe beef has garnered global fame and taken on almost mythical proportions - tales of the incredibly tender meat of cattle fed with beer and massaged daily, universally recognised as the highest quality steak in the world, so out-of-this-world that it even inspired the parents of Los Angeles Lakers superstar Kobe Bryant to name him after it; the stories go on and on. I had never had real Kobe beef before - there are many imitations but genuine Japanese Kobe beef is available only in Japan, and never exported - so on my recent visit to Tokyo, I had to seek it out. Kobe beef comes only from select Tajima cattle born in the Hyogo prefecture so even in Tokyo it is not widely available.  Bifteck no Kawamura is a chain of restaurants, six in Hyogo Prefecture, one in Ginza in Tokyo, renowned for serving the best Kobe beef around - as Kawamura-san himself told us, his business plan is simply to snap up every champion cow going at auction, and he largely succeeds. 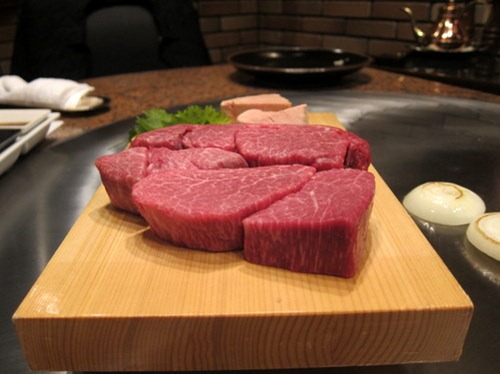 Various set meals are offered, differing mainly on the choice of beef - Champion cow, Champion bullock, Award-winning cow, Award-winning bullock, etc. We went for the Champion cow - it's not everyday one gets to sample this wondrous meat, especially one who doesn't live in Japan - it would have been silly not to pick the very best option available. 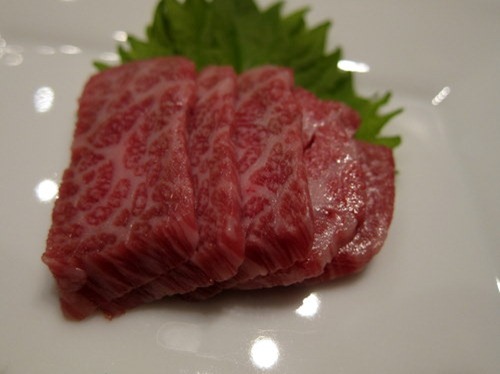 We started with The Highest Award (Champion) Winning Kobe Beef Sashimi, which was superb, the quality and creaminess of the beef really shining through – it was truly mouth-watering. The next two courses, a clear Oxtail Soup and Foie Gras Steak were nice too, and continued to build momentum for the highlight - The Highest Award (Champion) Winning Kobe Beef Steak. It was cooked right in front us, teppanyaki style. We requested it be done medium rare, of course, but it was cooked slightly beyond that - perhaps the chef, who had spent many years in London, got distracted chatting to us about the old place. 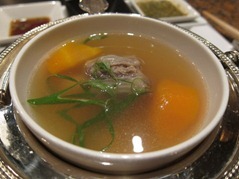 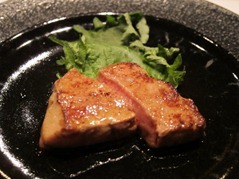 I can't quite believe I'm saying this, but I was disappointed by the beef. It wasn't bad by any means - in fact it was top quality steak, but it didn't melt-in-the-mouth or blow me away like I was expecting to after everything I had heard, read and been told about this almost mystical Kobe beef. The fact that the beef was slightly over-done didn't help either, but I doubt my opinion would have been changed had it been cooked to a perfect medium rare. 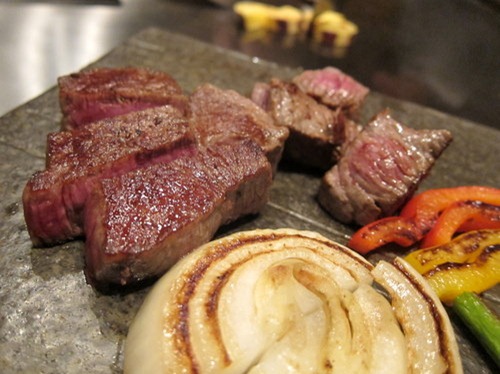 We finished with a stomach filler of garlic fried rice that was really bad - the rice far too sticky and clumpy, poorly cooked and tasteless.

In a nutshell…
A bit of a tough one. Kawamura, by all accounts, serves some of the best quality Kobe beef there is. It seems unfair, therefore, to mark it down based on the fact that the beef itself failed to live up to my expectations. Having said that, the meat was (slightly) overcooked, and the fried rice was terrible, and when one pays as much as this for a meal everything should be perfect and one should be blown away and I quite simply wasn't, not by a long way.

on Tuesday, May 03, 2011
Email ThisBlogThis!Share to TwitterShare to FacebookShare to Pinterest
Labels: Japanese, Steak, Tokyo