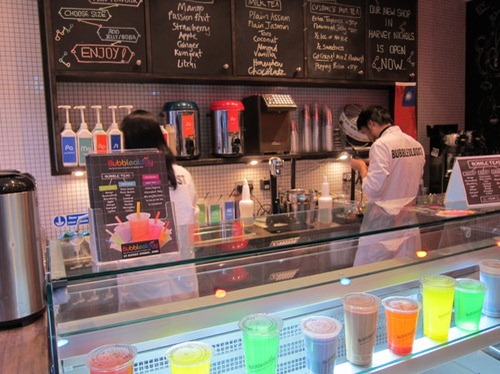 Bubble tea, for the uninitiated, is a milk or fruit-based tea drink containing chewy pearls made from tapioca starch. Originating in Taiwan, it took Asia by storm in the 1990s, before making its way over to the States, where it also built up a very sizeable following. That bubble tea is only now beginning to enter the consciousness of people in the UK is an indictment of how slow we are here on the uptake of Asian food trends compared to our friends across the pond, a fact that I always lament. But as they say, better late than never.

Bubbleology, which opened on Rupert Street in Soho in April (there is now a second outlet at Harvey Nichols in Knightsbridge) , is not the first, nor is it the only place in town to serve bubble tea; but thanks to some clever marketing, and a more mainstream approach, it is the first to generate more widespread press and interest. Perhaps surprisingly, given its origins in Taiwan, the man behind Bubbleology is actually a British former investment banker, Assad Khan, who fell in love with the drink when he was working in New York. The idea behind the shop’s decor is very similar to that of The Chin Chin Laboratorists, with science lab flasks and beakers, ‘scientific’ formulas on the wall, and staff dressed in white coats. It’s no longer original, but rare enough that it still qualifies as an interesting and unusual concept that certainly aids in creating a strong, and memorable, brand identity.

Bubbleology currently offers 7 milk and 6 fruit teas, although their website hints of more variations to come. They also let you mix and match to create your own brew. I had a Taro Pearl Tea. Now I must confess, I’m not a bubble tea fan, but it was decent, as far as bubble tea drinks go. 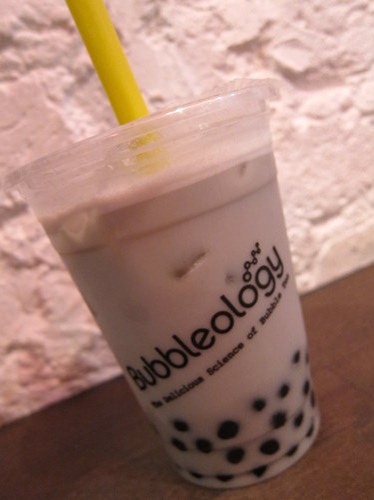 In a nutshell...
Any new opening that adds to the diversity of the London food and drink scene is very welcome, especially since a mainstream debut in the UK for something as popular in Asia and America as bubble tea, is long overdue. I’m personally not a huge fan, but I’m very happy it’s finally here nonetheless.