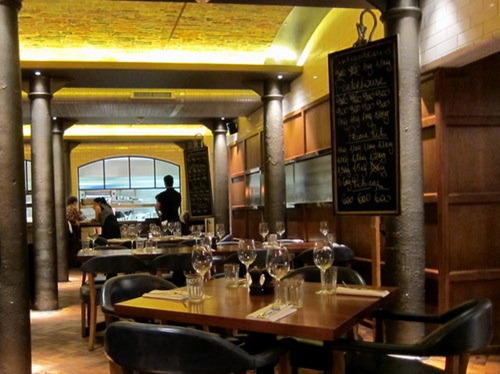 I have a confession to make. Up until about a couple of months ago, I had never been to Hawksmoor. I know - call myself a food blogger, and a steak-loving one at that, and I've never been to Hawksmoor?! Shameful. I finally addressed the issue with not one, but two visits to Hawksmoor over the space of three weeks, opting for the more central Seven Dials location rather than the Spitalfields original.

Despite Hawksmoor's renowned expertise with steaks, my first visit was actually inspired by a desire to try their burger (also critically acclaimed), as I was right in the middle of my burger quest at the time, and what burger odyssey would be complete without a visit to Hawksmoor. Having already sampled the burgers at the likes of Goodman, Bar Boulud, Hache and of course Byron prior to trying the version at Hawksmoor, many would argue that I left the best for last. The Hawksmoor Hamburger has made every top London burger list I have come across, and more often than not, the very top of those lists. Needless to say, I was very excited as I sat awaiting its arrival. 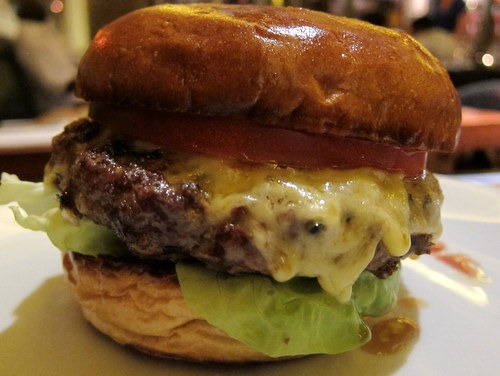 As soon as I took sunk my teeth into it, I immediately thought - this is a higher class of burger. The meat, a secret mix that includes small nuggets of bone marrow, was full of flavour, perfectly cooked (requested pink), and oh so moist. I often bemoan the lack of a special sauce, or relish, in burgers that choose to do without it, but I had no such complaint here – the taste, and flavour of the meat was plenty sufficient. The bun wasn't the best I've sampled in London (that would be Goodman, followed very closely by Bar Boulud), but it was good enough. So was this it? The best burger in London?

Well, rarely, if ever, do wonderful first impressions sustain for the entirety of an experience, and I have to report that, rather than confirming my initial feelings, subsequent bites into the burger in fact sowed some seeds of doubt in my mind. The (slight) over-saltiness of the meat started to become apparent, and the moistness of the patty resulted in a soaked bun that could no longer be gripped about halfway through the burger - a rather annoying development that actually made you forget how good the first mouthful was. But I mustn’t forget that first bite – this was, despite its flaws, a top-notch burger; better, on balance, than Goodman and Bar Boulud. But I’m going to stop short, at this point, of declaring it the best burger in town, because it wasn’t so good that I could immediately anoint it the best having not tried some of the others, safe in the knowledge that there couldn’t possibly be a better one out there better. So watch this space…

I should also point out at this point that Hawksmoor also offers a Kimchi Burger which has been the beneficiary of a number of positive reviews too. The Triple Cooked Chips that accompanied the burger were hard rather than crisp – they were pretty bad. 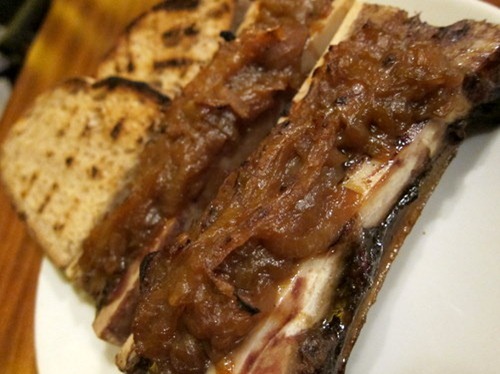 I then returned a couple of weeks later to finally try their much-vaunted steak. But first, Bone Marrow & Slow Cooked Onions for my starter was a success – smooth, slimy, full of beefy goodness and well complimented by the onions. And then, finally, the main event, the Fillet Steak... 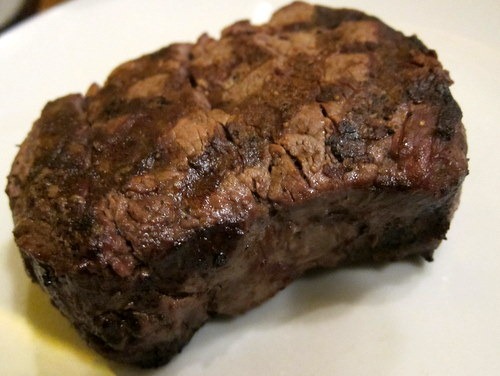 I was disappointed. Very disappointed in fact. There I said it. The steak was cooked exactly medium rare as requested, but it was dry, which I think is fairly apparent in the photo, and lacked the chargrilled flavour I was expecting. It wasn’t a terrible piece of steak, but it did fall significantly below expectations. The Béarnaise sauce I almost didn’t order saved the day somewhat, injecting some much-needed moisture into the meat, but it shouldn’t have been required – I am firmly of the belief that a juicy, succulent steak, cooked well, doesn’t need a sauce.

I was hoping Hawksmoor would be the answer – a properly good steak in London, one to match the awesomeness of those available in the States, but it wasn’t. Flavour-wise, it paled even in comparison to Sophie’s.

Having been distinctly unimpressed by the Triple Cooked Chips on my previous visit, I opted instead for the Beef Dripping Chips this time to go with my steak, and they were much better. The chips were so big and thick they were almost like your Sunday dinner roast potatoes, but were at least crisp, which could not be said of the triple cooked version. They still weren’t as good as the ones at Goodman mind.

In a nutshell...
Hawksmoor is almost universally acclaimed as the best – the best steaks, the best burgers. The burger, whilst not perfect, did come close to upholding that status, but the steak on this occasion was far below that standard. Perhaps it was an off night. Because of its massive reputation, I’m willing to give Hawksmoor a second  (third) chance, but on the evidence of this experience, I can only really reach one conclusion - that Hawksmoor is overrated in the extreme.