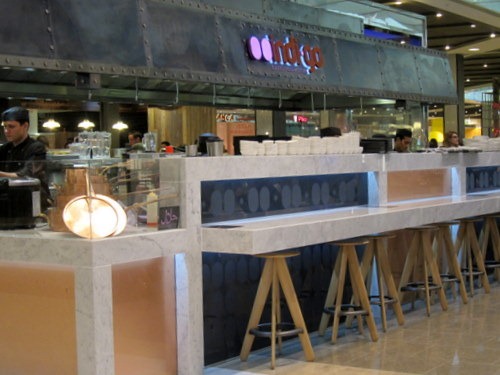 Westfield Stratford, the shiny, all-singing, all-dancing, brand spanking new, behemoth of a shopping centre is hardly a place I expected to find myself...like ever, for two reasons: 1.) It's literally the other end of town from me and 2.) There is a Westfield much closer, the original (just about) within walking distance from my flat. But as work took me to within two DLR stops of the scene of the Olympic Park, which houses Westfield Stratford, I seized the opportunity to survey the new build, and needless to say, sample one of its dining options.

First impressions of the Stratford Westfield - it's big; the design and layout is similar, but everything seems to be a super-sized version of the far-from-small Shepherds Bush location. It was crowded, especially given that this was a mid-week evening, but that might just be footfall from curious first-time visitors. As for the dining options - just like the original, many of the food outlets here are chains, but the class of chain at Stratford would appear to be of a higher quality, at least on "The Balcony" - the likes of Rosa's and Franca Manca, for example, are very highly regarded. That makes a pleasant change, given the paucity of decent eating options at the original Westfield. I opted for Indi-Go, an Indian street food vendor that I had heard some good things about. Indian street food, ironically served anywhere but on the streets, is clearly the in-thing on the London dining scene right now, with a new outlet popping up seemingly every week - given the generally high standard of the offerings, I'm loving it. 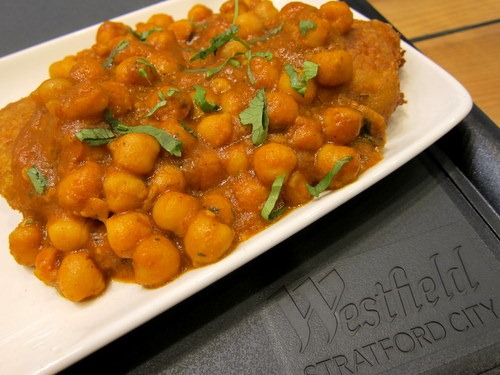 There are standard curries with rice on the menu at Indi-Go, but I went with three choices from the "Street Food" section. For those of you unfamiliar with how the system works on “The Balcony” at the Westfields, you place your order at the counter and are presented with a pager that will buzz to alert you when the food is ready (a matter of minutes); you return to the counter to collect your food, then find a suitable spot within the vast dining hall to park yourself. All very efficient. 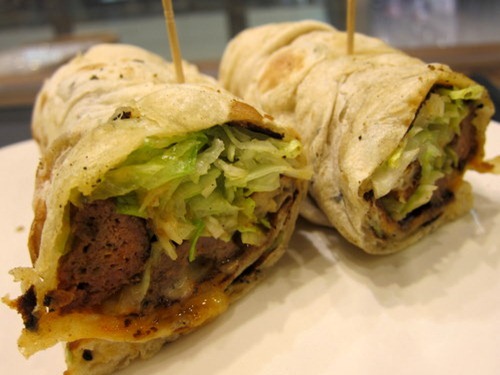 Meanwhile, the Lamb Sheik Kebab Wrap: Minced grilled kebab, lettuce, onions, tomato, and yoghurt wrapped in soft naan was very enjoyable - the kebab, not dry, as I was almost certain it would be, and possessing a good chargrilled flavour, complimented by a lovely, yoghurty sauce, all wrapped in a soft, fluffy nan bread.
Finally, Pav Bhaji: Famous from the streets of India mashed vegetables in a tangy cumin sauce served on hot toasted bun was superb - the sauce was delicious - appetising and well spiced; and to lap it up a lightly buttered, toasted, crisp on the edges, soft and pillowy on the inside, brioche-like bun that was the equal of any bun I have come across. Despite being very full, I just couldn't stop.

My Mango Lassi was, for possibly the first time ever, not too thick. 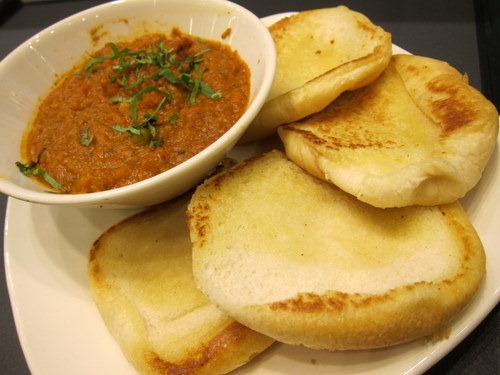 In a nutshell...
Indian street food is fast becoming commonplace on the London dining scene, and Indi-Go can hold its own against the best. Despite its origins on the streets of India, the modest food court at Westfield seems ill-fitting for Indi-Go's dishes. Perhaps it’s because the prices were a touch on the expensive side for what it professes to be - that was my biggest (only) issue with Indi-Go. Or more likely, its because I could easily see these dishes at more upmarket establishments; and indeed they surpassed much of what I was served not so long ago at Veeraswamy. Now if only I could take a gentle stroll, rather than have to negotiate the vagaries of three tube lines, to get home.