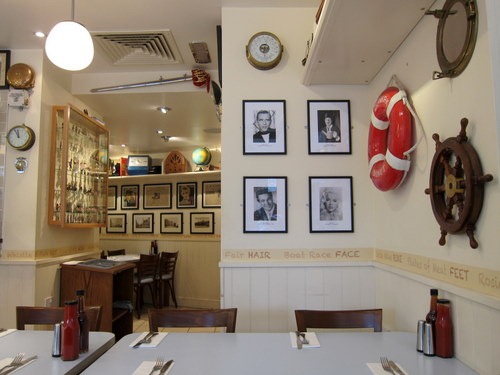 Pat 'Pop' Newland, a veteran east end fryer who started his fish and chip career way back in 1945, recently came out of retirement to open Poppies at Spitalfields. The styling at Poppies plays on its roots, using a '50s theme, with old jukeboxes and various other fittings from that era, and a very cheery pastel blue colour scheme - I loved it. The food, however, left so much to be desired. This was on old-school chippie alright, in all the worst ways. The fish wasn't even cooked to order, but instead served from a heating cabinet. I had a Regular Cod & Chips, with a side order of Mushy Peas. The fish was, unsurprisingly, not exactly as crisp as could be. The batter too, was very ordinary - never mind my two recent finds, Geales and Kerbisher & Malt, any of the other fish & chip shops I used to frequent (and bemoan) before discovering "The Big Two" would have wiped the floor with Poppies. Hand cut chips were okay - they were clearly made with good spuds, but were, again, lacking in crispness. The tartare sauce needed more gherkin; the mushy peas, supposedly "homemade", tasted like a tinned version. Service, described as haphazard by others, was fine, and friendly, on my visit. 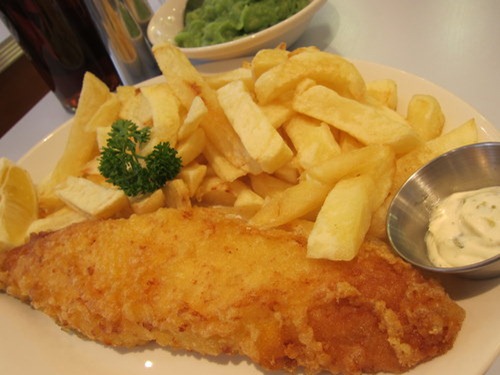 In a nutshell...
Just because someone has done something for many years doesn't necessarily mean they're any good at it. Poppies is a case in point. It wasn't horrible, mind, but given the owner's background, I was expecting a whole lot better. If this is what an old-school chippie is, please, bring on the new-school.

on Wednesday, January 11, 2012
Email ThisBlogThis!Share to TwitterShare to FacebookShare to Pinterest
Labels: Fish and Chips, London