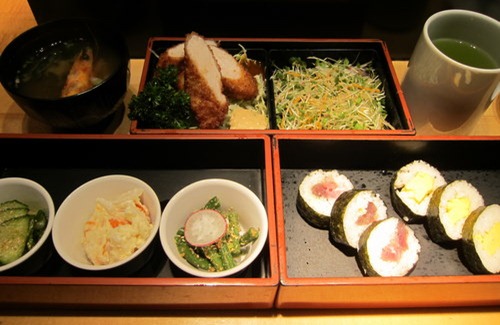 Yoshino used to be one of my favourite hidden London restaurants. Located off Piccadilly Place, on a tiny side street with nothing other than a small neon side saying "Sushi” to indicate its, or anything else's presence, this used to be my go to place if I happened to be shopping solo in the area - service was pleasant, and quick; food was of a very decent standard; and prices, especially when sticking to the set meals, were very agreeable.

It had been a while since I last visited, and I immediately noticed that the menu had changed. They used to do a very good value-for-money set meal, called the Yoshino Zen "YUKI", which included several pieces of sashimi, a lovely grilled mackerel, sweet potato tempura, salad, miso soup and rice all for a tenner. The Yoshino Zen "YUKI" was still on the menu, but its components had changed significantly, and it was now £12. But more on that later. On this occasion, I went instead for the Yoshino Zen "TSUKI", which, for £20, comprised of: Tuna Carpaccio, Wild Jumbo Prawn Tempura, California Spicy Tuna Rolls, California Organic Salmon Rolls. 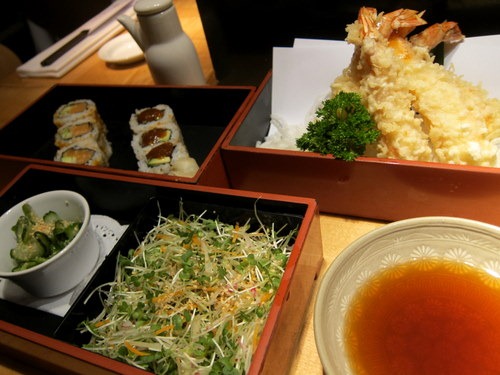 Tempura items could be found all over the re-made Yoshino menu, and they were all starred as Chef's Recommendations, so I don't think it was unreasonable of me to assume that they had recently acquired some sort of expertise in the matter. It’s what prompted me to order the "TSUKI", in fact, to sample the tempura. How wrong I was. The tempura batter was heavy, and not particularly crisp - it was a decidedly below average version. The rest of the items were alright, exactly how you might expect them, but nothing jumped off the plate (apart from the spicy tuna rolls that used a curry sauce to impart the "spice" - weird, and not at all successful; oh and the use of avocado that was insufficiently ripe, and hence too hard, in the salmon rolls). And at £20, value for money wasn't exactly in Yoshino's corner anymore either, even if the portion of tempura was fairly generous.

I would return exactly a week later, this time opting for the Yoshino Zen "YUKI" that had served me so well in the past, albeit in a different guise. It was now made up of: Tuna Carpaccio (a smaller portion than the "TSUKI", Fried Chicken, Tuna Roll, Omelette Roll, Japanese Salad.

As with the “TSUKI”, nothing stood out particularly, but the katsu chicken was at least crisp, unlike the tempura, and most importantly, the cost fell more within my perception of Yoshino as a reasonably priced quick bite place. For dessert, a Homemade Maccha Azuki lacked any real green tea, or red bean flavour, was too cold, and so sour it tasted only of milk that had gone off. 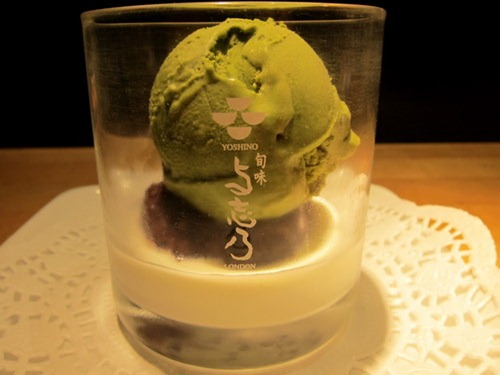 In a nutshell...
Yoshino is, most disappointingly, no longer what it used to be. The refined service that attracted me in the past remains, but the value-for-money and quality food that used to be such attractions are no more. It will be a while before I return.