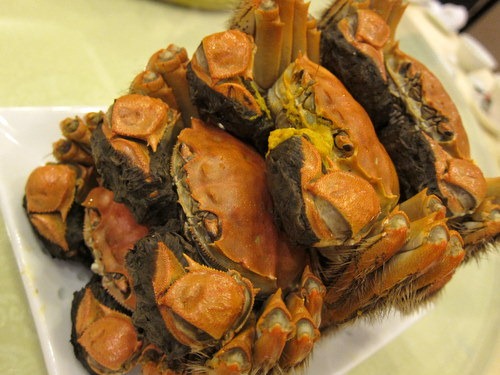 The Chinese Mitten Crab, popularly known as the Hairy Crab, is a seasonal delicacy available only from September till the end of the year. It is most abundant in the south east of China, and particularly in Shanghai, as the Yangcheng Lake, the only recognised source of genuine hairy crabs is located just outside nearby Suzhou, in the Jiangsu Province. Our visit to Shanghai in mid-November seemed to be the perfect storm, then, to sample this highly sought after treat, at its very best.

I should note, at this point, that the immense popularity, and cost of hairy crabs, has paved the way for many a counterfeit version - the Yangcheng Lake Hairy Crab Association estimating the market in fake crabs to be ten times the size of the real one, despite some less than stringent rules used in determining what constitutes a genuine hairy crab - a crab only has had to live for 6 months in the lake to qualify. The best way to ensure you get the real thing is to eat at a reputable establishment, and highly regarded Ling Long Ge, which is never far from the top of any list of the top hairy crab restaurants in Shanghai, fit the bill to a tee. We visited for dinner on our very first night in town. 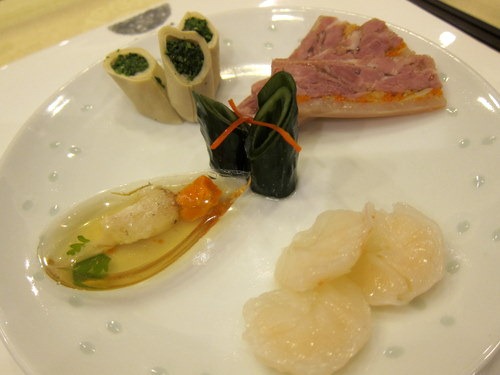 Rather than combing through the extensive menu trying to pick out all the specialities and signature dishes, we opted for one of the higher end sets that seemed to hit most of right notes. It started with (and I apologise for the clear spelling and grammatical errors in the names of some of these dishes, but as always, I quote from the menu verbatim) a Cold appelieers combo, featuring Bear Curd Roll in Chicken Consomme; Ham & Crab Meat in Aspic and Crab Claw in Aspic which looked presentable enough but turned out to be exceedingly unmemorable - a "meh" dish, as I often say. 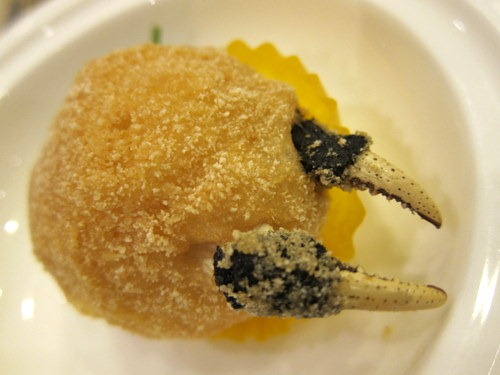 Stuffed Crab Claw with shrimp was your typical deep fried prawn and crab ball available at any and every Chinese restaurant in Asia - at least the version here boasted a light batter, and some beautiful crab roe oozing out of the middle.
Giant prawns Sauteed in Crab oil had an almost Italian-like tomato-y sauce, but was too oily for my liking. 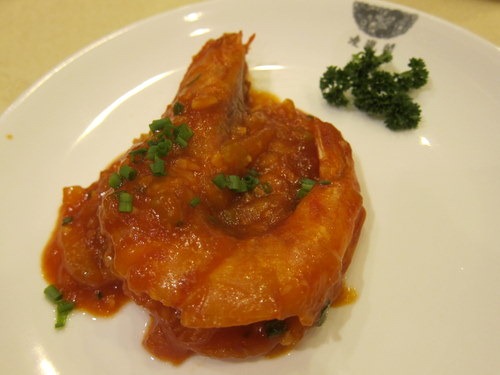 So far, so-so, but at least the main purpose of our eating here was up next. Steamed Chinese mitten-handed crab (substituted with a Steamed Shanghai crab when the hairy crab is not in season) was briefly shown to us whole, at the table, then taken to the back and efficiently dismantled, to be returned beautifully laid out in ready to eat parts. The roe, always the star of any hairy crab dish, was wonderfully creamy, and the meat was nice and sweet too. What was a minor disappointment, however, was the size of the crustaceans - they were rather smaller than I expected. 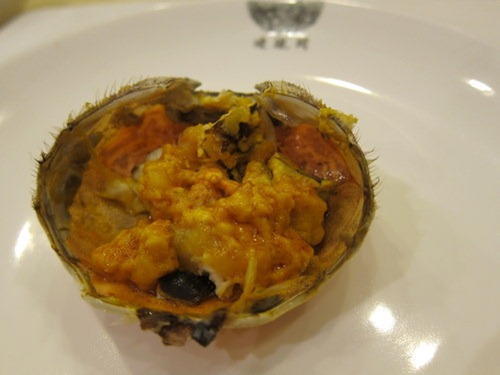 Asparagus Tips with Crab Meat was reasonable, but not nearly as good as a very similar dish we had at Xin Ji Shi just a few days later. 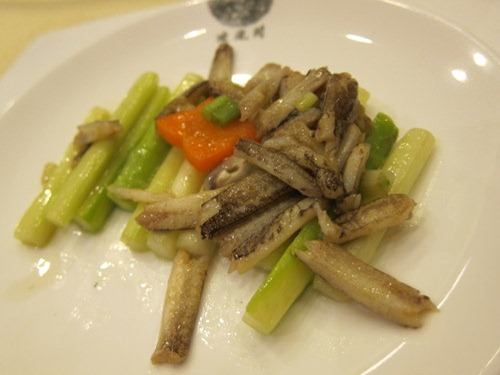 Szechuan Tan-tan Noodle, on the other hand, was splendid, and easily the star turn of the night - good fresh noodles, a lovely sesame-flavoured soup, topped with beautiful crab meat. 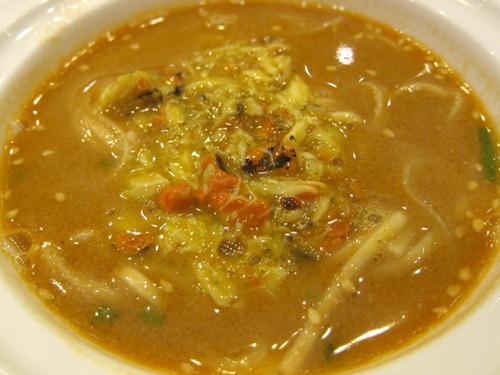 To finish (we did have dessert, but it didn't warrant a mention), Steamed soup Dumpling was our maiden taste of xiao long bao on this trip, and a first introduction to the thicker dumpling wrappers preferred by the locals, but not by yours truly. The soup inside the dumplings also lacked flavour on this occasion, but given that Ling Long Ge is not a XLB specialist, I was willing to give it a very generous pass on this count. 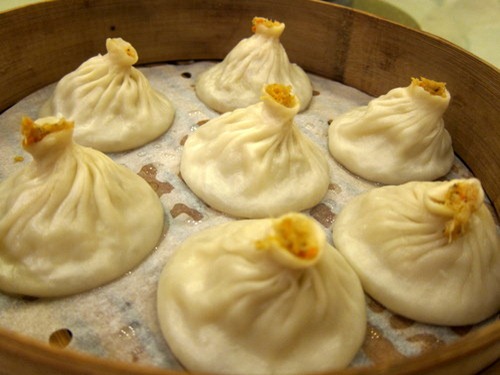 In a nutshell...
There was nothing particularly bad about this meal; in fact it was, for the most part, reasonably enjoyable, but the rather high count of dishes that failed to excite or make any lasting impression was a disappointment, and I include in that the famed hairy crab which, while good, was not nearly as great as I had expected, or have had in the past. And for a hairy crab specialist restaurant of the reputation, not to mention expense, of Ling Long Ge, that counts as a failure. The dan dan mien was absolutely delicious, but one swallow does not, a summer make.