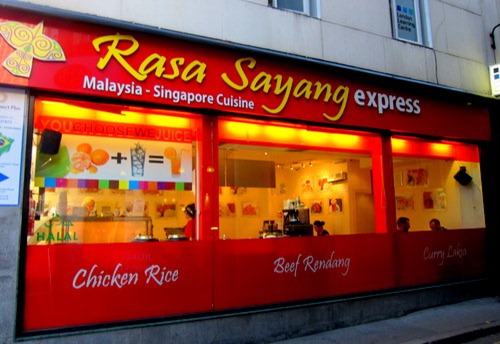 Rasa Sayang in Chinatown is a generally well-regarded Malaysian restaurant, with many even proclaiming its food the very best example of this genre of cuisine in the capital. I've only been to Rasa Sayang once, shortly after it opened a couple of years ago, and wasn't all that impressed. Rasa Sayang Express opened earlier this year at the top end of Oxford Street, near the intersection with Tottenham Court Road, and as I happened to be in the area, I thought I would give it a try/second chance.

The menu at Rasa Sayang Express is simple - 16 "meal-in-a-plate" options each priced at £5.99 with the usual suspects - Nasi Goreng Istimewa, Nasi Lemak, Hainanese Chicken Rice, Mee Goreng, Beef Rendang all represented. I went for the Nasi Lemak, as well as Chicken Satay, which, with just 5 skewers (along with the traditional accompaniments of cucumber, onions and pressed rice), pushed the "meal-in-a-plate" concept just a little bit.

The food was served in an instant - everything here is clearly pre-prepared, then just warmed up. That's not necessarily a problem, especially if you order the right dish - nasi lemak, for example, is often cooked in a batch and then sold throughout the day in Malaysia anyway - with its composition of steamed coconut rice, and a mix of sambals and curries, it really doesn't matter all that much. Other items might have suffered a bit more, I dare say, items such as Pan-Fried Carrot Cake, which I did not sample, or the chicken satay... 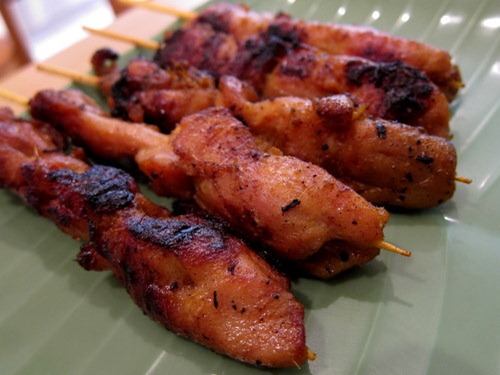 Now satay isn't always cooked to order in Malaysian stalls, and Malaysia Airlines actually serves a very decent satay tens of thousands of miles in the air, so pre-preparing a satay dish beforehand can still produce serviceable results. What was not acceptable here was that the satay had clearly been reheated multiple times, giving the meat a dry, insipid feel. The flavour of the chicken actually wasn't too bad, and the pieces were at least reasonably generous, unlike the awful version at Jom Makan, but the multiple re-heats ruined it.

The Nasi Lemak, meanwhile, was alright. The rice was a bit too mushy, and didn't have any great coconut taste to it, but was at least fluffier than the rendition at Jom Makan; though not even remotely a match for Bonda Café’s. The chicken curry was okay, as was the sambal, which displayed a satisfactory level of heat. 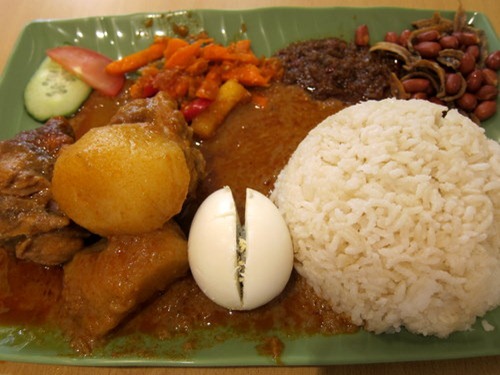 So from a food perspective, not the best, but not downright terrible either, even accounting for the multiple-reheated satay. It's the setting here that I have the biggest issue with. Rasa Sayang Express makes no bones about what it is. It is a canteen. A splash-and-dash eatery. That's absolutely fine. But that does not mean the décor has to be this tacky - not only has every expense clearly been saved in kitting out the place, but everything is so distasteful you almost wonder if the owner was offered some better looking furniture and fittings for the same price and turned it down anyway because it wasn't vulgar enough for the restaurant. It's that bad. Don't get me wrong - there is absolutely nothing wrong with cheap and cheerful, but whilst most certainly cheap, this is really not cheerful in the slightest. City Càphê, a quaint little Vietnamese restaurant in the Square Mile with the same quick-eat ambitions as Rasa Sayang Express, and prices to match, is an excellent example of a budget restaurant done right. Even Japanese Canteen is a hundred times better. For that matter, amongst Malaysian restaurants, Bonda Café has a very basic décor, but one that doesn’t make you want to hurl (not to mention infinitely superior food, by the way).

If this restaurant served any other cuisine, I probably wouldn’t have batted an eyelid – shoddy and shabby restaurants are a dime a dozen; but as a Malaysian, Rasa Sayang Express infuriates me. This is Oxford Street, one of the most famous shopping avenues in the world. And this is how Malaysia is portrayed to the world?! Yes it is true that the owner has no obligation to promote Malaysia, just to fill his pockets; but as a Malaysian, I have an obligation to be disgusted.

In a nutshell...
Rasa Sayang Express has a good location, a sensible price point, decent-sized portions, and not horrible food. The "ambience" and décor, however, is just wrong in every imaginable way, even allowing for its modest ambitions and budget prices. This is a watered-down, tackier version of a Chinatown establishment - enough said. Ordinarily, ratings are based on food, value, service and décor & ambience, in that order, and if I was to stick to that, Rasa Sayang Express probably deserves a better score that the one below. But on this occasion, the heart overrules the head. I was presented with a loyalty card, which entitles one to a free meal after seven stamps. Hah!