Essenza on Kensington Park Road in Notting Hill is a long-time favourite with much, still, to recommend it. It is a neighbourhood restaurant with that unmistakable homey feel - the staff are friendly, the customers are regulars greeted as friends, and the atmosphere is relaxed with not so much as a smidgeon of that over-formality and haughtiness that wait staff at Michelin-starred establishments so often exhibit, intentionally or otherwise. You're probably thinking - sounds great, but that's just like every other neighbourhood restaurant in town, and so far, you're right. What sets Essenza apart is the quality of its cooking, which has remained consistently of a very high quality through the years. We started, as usual, with a Calamari, e gamberoni fritti – Deep fried squid rings and prawns served with sweet chilli sauce to share. It was delightful, as always - the batter crisp, light and moreish, exactly how it should be. For my main course, Spaghetti all’aragosta – Spaghetti with fresh lobster hits the spot every time. In keeping with the general preference in this country, the pasta was not cooked as al dente as it would be in Italy, but was still fine; the sauce was well balanced and full of flavour - simply a thoroughly enjoyable plate of food, and one that would grace any Michelin-starred Italian restaurant in London. 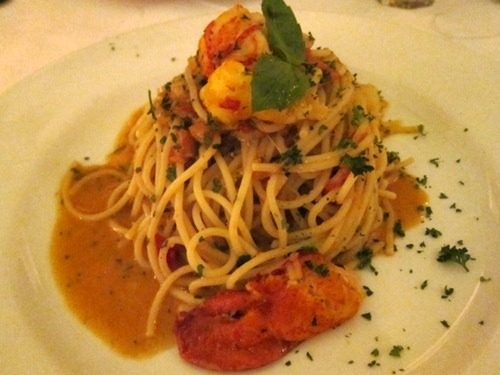 A Chocolate soufflé with crème vanilla ice cream pud, which is actually a lava cake rather than a soufflé was full of gooey chocolaty goodness, and made even better on this occasion by the addition of a tea spoon of white truffle honey. In a nutshell...
I don't visit Essenza nearly as often as I should, but I've never been disappointed by a meal here whether its days, weeks or months that pass between visits. My only real issue with the place is its lack of proximity to a tube station, but that’s a small gripe really. If you live in the area and you haven’t been to Essenza, you really must – it will swiftly become you’re new “local”. And for those of you who don’t live in the area, Essenza is worth the journey.