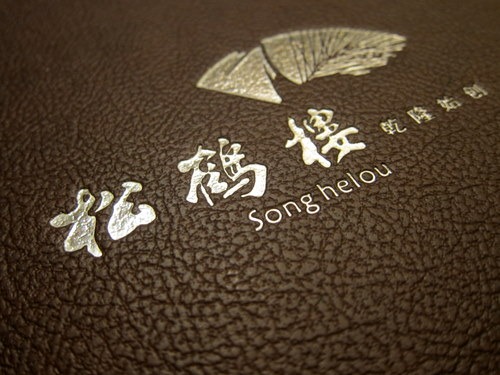 Song helou is, along with Deyuelou where we would eat the following night, widely regarded as one of the two best traditional restaurants in Suzhou. We had dinner here on our first night in town, and initial impressions were positive - the decor was classy, and service was pleasant enough - which can't always be said, even of some of the best dining institutions, in China. 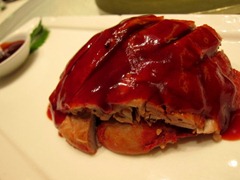 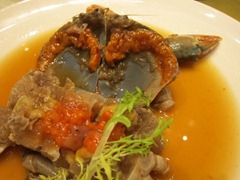 We kicked things off, as usual, with the cold dishes - Soochow Braised Duck, with a sweet plum sauce, was appetising; Chilled Crab with Chinese Wine Sauce was an interesting preparation, but with an alcoholic taste and content that was way over the top for my liking - a classic example of something that sounded better on paper than it turned out in reality. 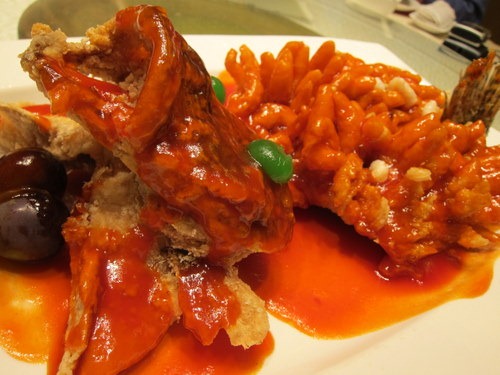 Onto the hot dishes, and a first sampling on this trip of one of the specialities of the area, Sweet and Sour Mandarin Fish. Beautifully deep fried, the fish was crisp and light, and thanks to the tangy sweet and sour sauce, very tasty. Meanwhile, Shrimp Stuffed Fresh Mushroom boasted a lovely, slightly chewy texture. Boiled Pork Meat Balls was served individually in soup bowls, with a clear broth - the meat was meltingly tender, and packed full of flavour - delicious. Deep-Fried Eel had half a bowl of oil tipped on top of it right in front of us, which you might have thought would make it rather too, well, oily, but whilst not something I would recommend as part of one's daily diet, it was very enjoyable and not too cloying at all, as evidenced by the fairly large quantity I was able to put away. For the obligatory pork dish, we opted for the Simmered Pork this time, and though decent, and a (welcome) change from the Dongpo Pork we had been eating the past few meals, it was a tad tough in places and easily one of the lesser dishes on the night. Jujube Cake was alright. 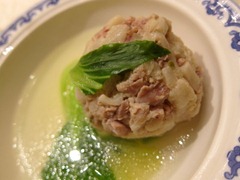 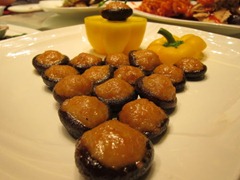 The penultimate dish, Stir-Fried Egg White with Crab Roe, took quite a while to arrive but when it did, we a.) understood why it took so long and b.) didn't mind one bit. Best described as a savoury soufflé (and we all know how long a soufflé takes, not to mention its propensity to fail) the dish was served individually, with delicious, eggy crab roe on a small plate, topped with a tall cloud of delectably light and airy egg white. Resembling a snow covered Christmas tree, this was a dish that hit the spot presentation, as well as taste wise - it was brilliant. 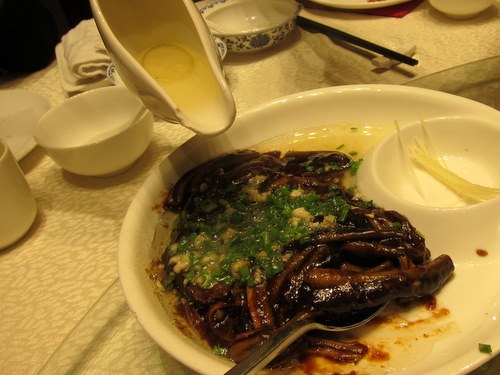 Finally, Mixed Noodles with Spring Scallion, Oil and Soy Sauce was so simple, yet thoroughly enjoyable thanks, in no small part, to the quality of the noodles. 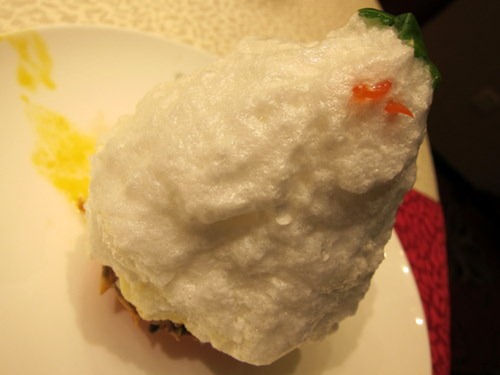 In a nutshell...
A very good meal in pretty much every aspect. It was not difficult to see why Song helou is rated as one of the best restaurants in Suzhou. Deyuelou had much to live up to the following night, and I can tell you now that it singularly failed to do so. If the title of best restaurant in Suzhou is indeed a straight fight between Song helou and Deyuelou, I know which one my money's on.