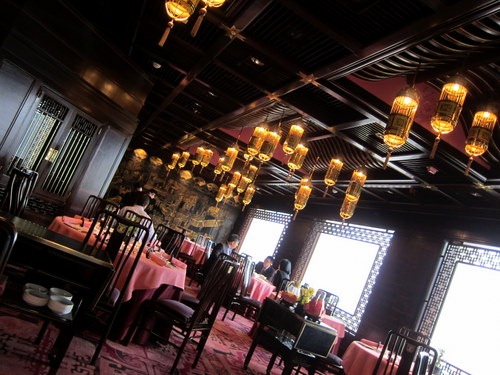 Hong Kong is, needless to say, not short of dim sum places; and with so many options and just two lunches on our whistle stop visit, we had to make our choices with great care. We opted for one upmarket venue, and one more traditional shop, starting on the first day with Man Wah at the Mandarin Oriental, said to be one of the very best exponents of modern, cutting edge dim sum in town.

The setting, on the top floor of the hotel is a rather spectacular one, with breathtaking panoramic views of Victoria Harbour and the city’s skyline, and a grand, if rather ostentatious, décor. The restaurant is only small and it was, unsurprisingly, full on this mid-week lunchtime, so I would definitely recommend reservations. 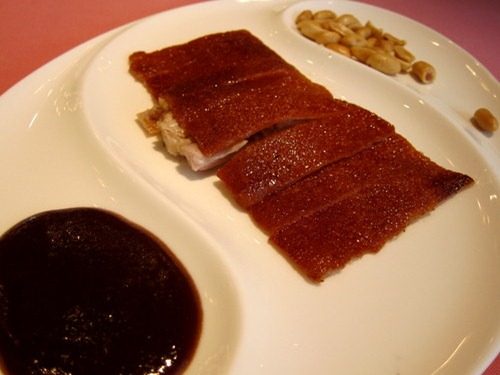 We ordered largely from the dim sum menu, pleased by the flexibility shown by the restaurant in offering to make three dumplings for every serving, one for each of us, even if a standard serving sometimes contained two or four - all dim sum restaurants should adopt this approach; there is nothing more annoying than trying to split three dumplings between four. Anyway, I digress. In addition to the dim sum, we couldn't resist sampling the Roast suckling pig - it was an accomplished plate - tasty and crisp, if ever so slightly more greasy than I would have liked. 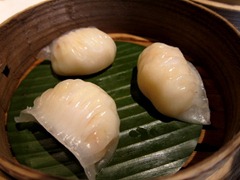 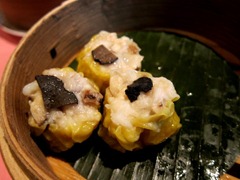 Of the dim sum, Tiger prawn, bamboo shoot dumpling, known to you and me as har gau was absolutely terrific, with a superb, paper-thin wrapper, and a big, juicy prawn - this was a near perfect rendition, and just made one sigh at the sorry versions that pervade almost all London places, including the much vaunted Hakkasan and Yauatcha. After that opening, I was readying myself for a dim sum meal like I'd never had before, but sad to say, little did I know that the peak had already been scaled and it would be a slow and steady descent from there. 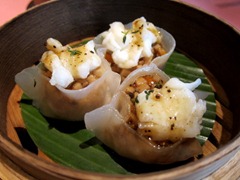 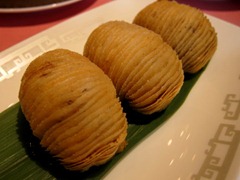 Lobster dumpling, black bean sauce again displayed an exquisite, thin skin, but failed to excite the palate. Pork siu mai, truffle was fairly standard, save for the piece of truffle on top which served no purpose except to inflate the bill. Beef tenderloin puff, black pepper sauce had a lovely flaky pastry but a none-too-convincing filling that was a touch too peppery. Barbecued pork bun was soft and wonderfully fluffy with a tasty filling that was, however, blown totally out of the water by the char siu we were to have that very night at Lung King Heen. Golden taro puff, abalone was average by Asian standards; the abalone combination not working all that well. 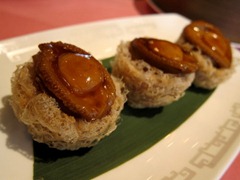 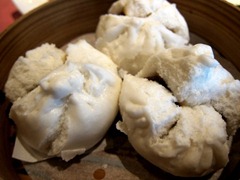 To finish, Fried flat rice noodles, U.S. rib eye beef, X.O. chilli sauce promised so much, especially after the delightful X.O. sauce had been provided as a dip with the dim sum and met with universal approval, but delivered so little, lacking in even the tiniest bit of "wok hei" - the flavour imparted from a flaming wok. 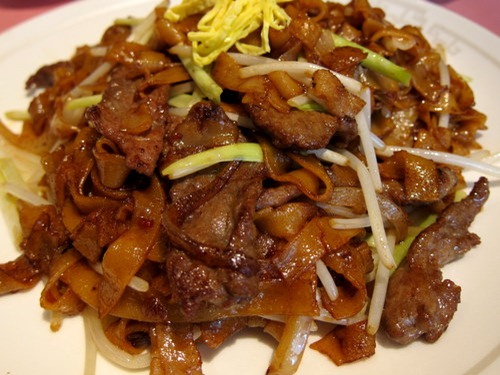 Dessert then took an absolute age to come, somewhere in the region of 20-30 minutes, despite more than one reminder. When it finally did arrive, Bean curd pudding, Okinawa black sugar syrup was pretty good with a velvety smooth texture, but one's enjoyment of the dish couldn't help but be tempered by the wait that preceded it. 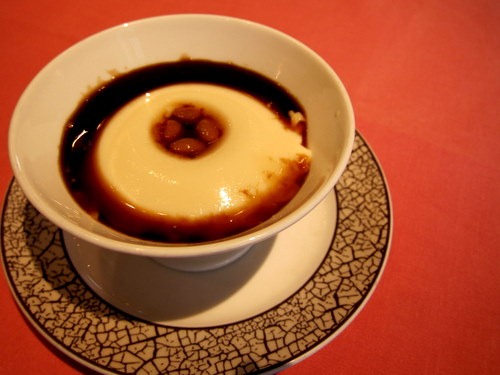 In a nutshell...
Man Wah would easily trump any dim sum restaurant in London but this is Hong Kong, the home of dim sum, and the bar here is set considerably higher. There was no doubting the level of refinement of the dim sum here, but given the location, given the stream of glowing reviews, given the extremely robust pricing, Man Wah failed, singularly, to meet expectations.