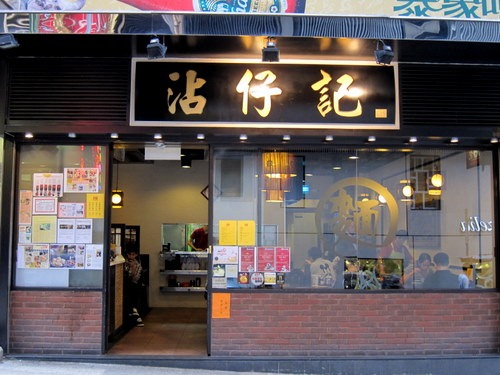 There are two places that always come up in any discussion about the best wonton noodles in Hong Kong - Mak's Noodle and Tsim Chai Kee. Conveniently, they are located directly across the road from each other, so one can easily try both and decide for themselves in the space of, conservatively say, half an hour. We went first to Mak's, had an amazing bowl of noodles there, then crossed over to TCK where, curiously enough, there was a bit of a queue this Monday mid-afternoon, when Mak's had been practically empty. The wait was only short, mind, and we were soon seated, the three of us sharing a table of four with a solo diner.

The menu didn't take much perusing - 3 King Prawn Wonton Noodles please! A plate of kai-lan appeared on our table almost instantly. Err... oh it's complimentary? Great! The bowls of noodles - full-sized regular bowls this time, unlike Mak's tiny portions - followed shortly thereafter. I took one spoonful of the soup and knew immediately that this was an inferior product. The soup had none of the depth or complexity of flavours bursting out of Mak's rendition. The noodles itself were fine, and the wontons weren't bad - filled with a large, bouncy prawn they were considerably bigger than Mak's, but still, not nearly as good. 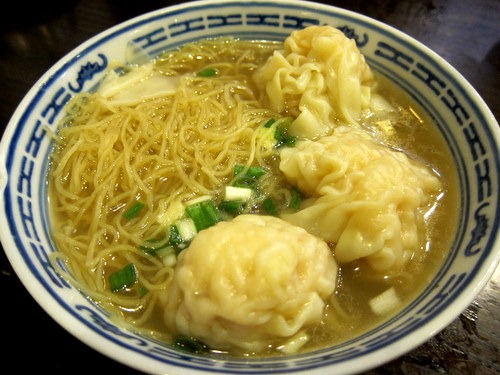 In a nutshell...
I’m finding it very difficult to give Tsim Chai Kee a fair rating, because I ate here five minutes after Mak's. If TCK is indeed one of the two best wonton noodle places in Hong Kong, as is often said, then it is without a doubt a distant second - this is a battle Mak's wins hands down, with one hand tied behind its back. It isn't even close. To be honest, I can’t understand why TCK is even in the conversation when all one has to do is cross the road to sample an infinitely better version. And I really do mean infinitely better.

That's not my problem. My difficulty lies in determining how much worse that Mak's TCK was. If I had eaten here first then crossed the road rather than the other way around, would I have thought TCK was good, and that Mak's was simply even better? I suspect I might have. After all TCK wasn’t bad, and it’s clearly very popular; and Hong Kong people know their wonton noodles (although a large part of me suspects it's the prices more than anything else - TCK charges HKD 19 for a big bowl and throws in a free veg, Mak's is HKD 30 for a tiny portion - that draws the punters in here).

A bit of help did arrive the following day when I ate at another highly regarded wonton noodle place, Tasty Congee & Noodle Wantun Shop at IFC – that meal provided conclusive proof that Tsim Chai Kee was not even the second best in town.

A decent wonton noodle, but some way short of the best.