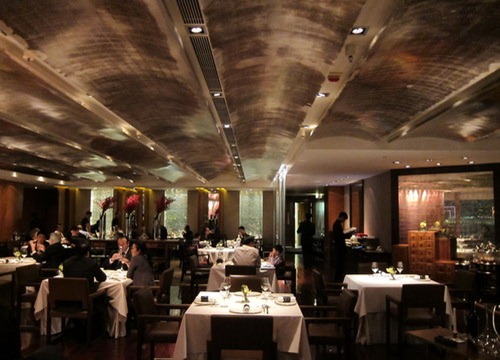 Lung King Heen in the Four Seasons Hotel, with a stunning view overlooking Hong Kong's Victoria Harbour, was the first Chinese restaurant in the world to be awarded 3 Michelin Stars, when the Michelin Guide first started rating restaurants in Hong Kong in 2008. I ate at Lung King Heen a couple of years ago and came away very impressed - it was indeed a class apart from any Chinese fare I had previously encountered. So when we returned to Hong Kong recently, a revisit was very much in order. 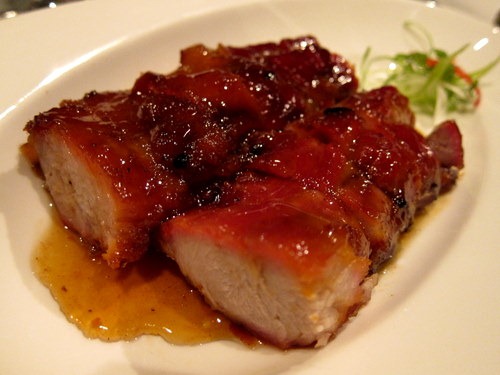 Unlike on the previous visit, when we booked late and could only be accommodated with a table in the middle of the room, we were sure to make our reservations well in advance on this occasion, and were rewarded with a table by the window, complete with the much vaunted view that was indeed a sight to behold.

Perusing the menu, I was immediately reminded of a quirk I had observed on our previous visit - practically every other dish was tagged as chef recommended - so despite ordering a fairly large number of items, everything we ordered turned out to be a chef’s recommendation. 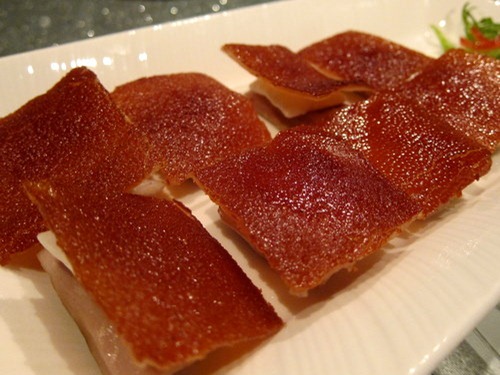 Of the three appetizers, Barbecued Pork with Honey, was the shining star - tender with a lovely hint of sweetness, this was char siu like I have never tasted before. The other two openers were rather less successful - Barbecued Suckling Pig was alright - pleasingly greaseless, but a tad "gamey", whilst Mixed Hot Peppers with Fermented Beans and Chilli Soy Sauce was exactly what it said on the tin, a plate full of hot peppers - fiery, yes; special, not so much. And yes, the plate of peppers was also a “chef’s recommendation”. So a mixed start, and unfortunately, the trend would continue for the rest of the meal. 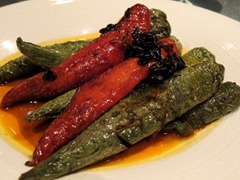 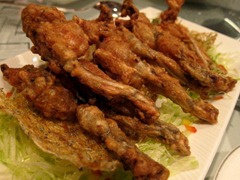 Crispy Marinated Pork Loin in Fermented Bean Curd Crust with Pancakes, a dish we had sampled on our previous visit was sensational, and every bit as good as the memory - lovely, tender, beautifully battered pork, with sweet pancakes that provided a very nice contrast. Lung King Heen Roasted Chicken was superb - moist flesh and an excellent crispy skin making for a chicken dish, so often a thing of mediocrity, of significant note. Baked Crab Shell stuffed with Onion and Fresh Crab Meat also qualified as a success. 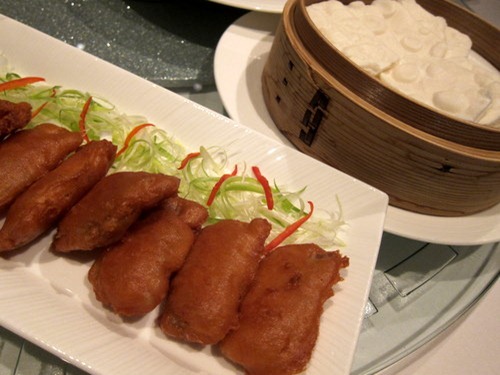 But for every triumph, there were just as many average dishes. Sautéed Lobster with Vegetables in Fermented Bean Sauce was fresh, but thoroughly unremarkable. Crispy Frog Legs with Spicy Salt tasted like your run-of-the-mill deep fried chicken dish. Roasted Eggplant stuffed with Scallops in Spicy Plum Sauce had an appetising, Thai-style sauce but was again nothing particularly memorable. Wok-Fried Superior Australian Wagyu Beef Cubes with Duck Liver, Ginger and Spring Onions, at a whopping HKD 980, but for the price, would have been utterly forgettable. 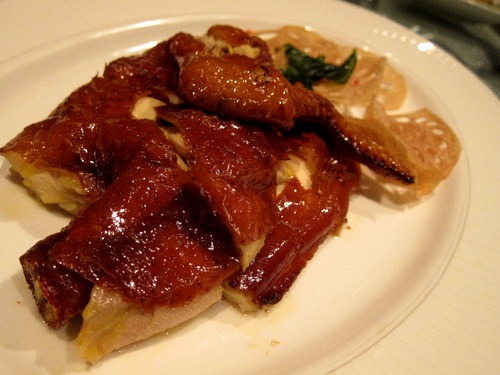 Braised E-Fu Noodles with Shredded Chicken in Superior Chicken Pottage had a nice, eggy sauce, but was too bland on the whole. 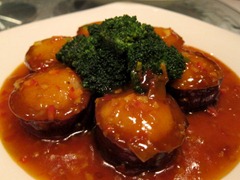 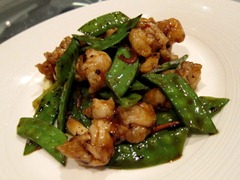 For dessert, a former Egg White Milk Custard Tart chef’s recommended dish which really stood out on our previous visit was, very disappointingly, no longer available. Instead, a Double-Boiled Egg White Milk Custard with Bird's Nest was rather good - fragrant, silky smooth, with just a touch of sweetness. Meanwhile, Chilled Mango and Sago Cream with Pomelo was an ordinary rendition; the twist of adding mango pudding to the bottom of the bowl not working all that well. 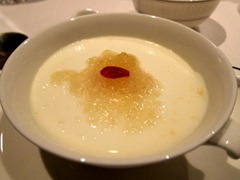 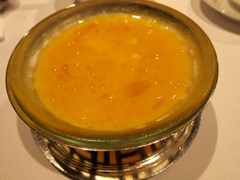 Service was variable, with the need to constantly ask for drink top-ups a particular source of frustration.

In a nutshell...
There were a handful of outstanding dishes, with the stunning char siu and glorious crispy pork especially noteworthy, but the overwhelming number of mediocre dishes meant Lung King Heen was quite the disappointment. Yes it was, on the whole, still a good meal but given the astronomical expectations that naturally, and rightly, accompany a 3 Michelin Star establishment, and the prices to match, Lung King Heen fell some way short of the requisite standard.

on Friday, May 04, 2012
Email ThisBlogThis!Share to TwitterShare to FacebookShare to Pinterest
Labels: Chinese, Hong Kong