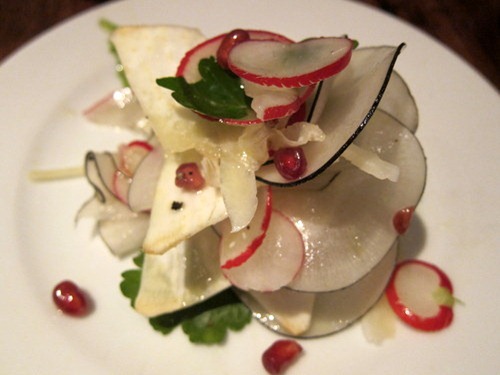 I still remember the day, not so long ago, when Bocca Di Lupo burst onto the London dining scene to almost universal acclaim, with professional food critics and bloggers alike practically falling over each other in a race to proclaim it the best thing since sliced bread, and thus marking itself down as one definitely for me to try. Well at least I thought that day was not too long ago - turns out Bocca Di Lupo first opened its doors in late 2008 and a good three and a half years have since passed! Oh well, as they say - better late than never.

The sharing concept here means that rather than being divided into starters and mains, dishes are categorised by their mode of cooking, i.e. "Raw & Cured", "Fried", "Grilled & Roast" etc, with the option of either small or large portions for most items. 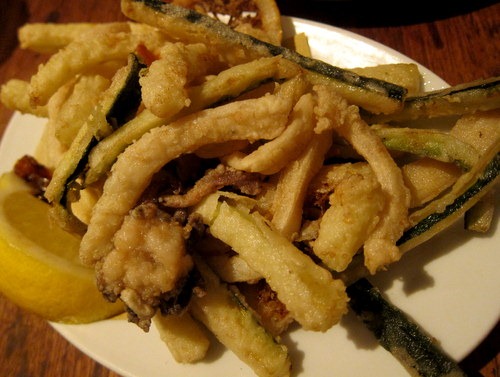 We opened with the much praised Radish, celeriac, pomegranate & Pecorino salad; truffle dressing, labelled by many as arguably the best dish across the entire, extensive menu. I have to say that I was decidedly non-plussed by it. The radish and celeriac combination was reasonably light and refreshing but the Pecorino cheese counteracted this, making the dish heavier, whilst the truffle dressing added only a scent of truffle, but no real flavour. A bit of a nothing dish really. If this was the best Bocca Di Lupo had to offer, we were going to be in for a very long night.

Next, the classic Fried young cuttlefish, courgettes & lemons, a dish that is very difficult to get wrong. But whilst this rendition was not horrible, it was certainly below average - the batter overly heavy, and insufficiently crisp. 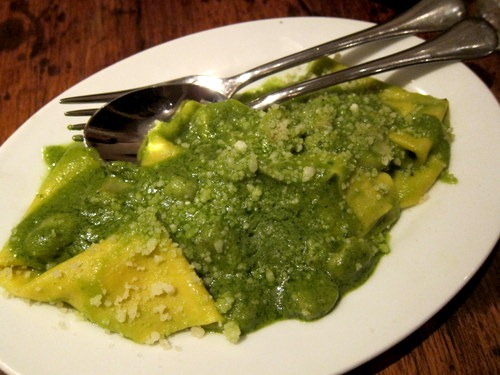 Fazzoletti (pasta handkerchiefs) with broad beans, basil & Pecorino proved to be the only praiseworthy dish of the evening - the quality of the beautifully soft and refined pasta, clearly freshly made, was there for all to see. It was easily the star turn of the evening, but when I say star, it was a lot less Lionel Messi at Barcelona - a star among stars, and a lot more Robin van Persie at Arsenal - a one man team; and even then not nearly as bright a star as the (soon to be former?) Gunners' prolific Dutchman. 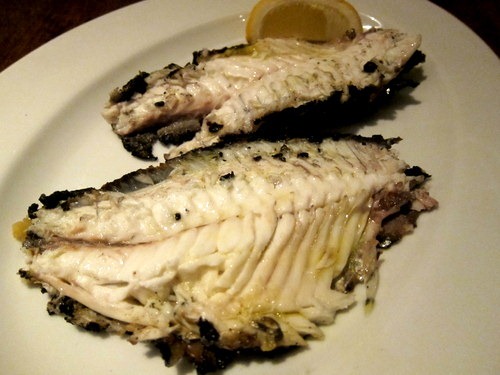 Fossil fish' - sea bream grilled in salt was our waiter's recommendation - in fact, most of what we had save for the radish salad came waiter-recommended - and it was exactly as the menu described - a piece of salted, grilled fish - not exactly the most inspiring of plates. Couple that with the items we had from the "Mixed Grilled Meats" section - Pork chop marinated in honey & rosemary and Spicy sausage - two slabs of meat slapped, without the slightest care in the world, never mind any hint of an attempt at making the food look even remotely appealing, onto an otherwise unadorned plate - and it made for a very dry and unbalanced "main course" portion of the meal. Even if the pork chop and sausage were the best pork chop and sausage in the world, one's enjoyment of them would undoubtedly have been diminished by the presentation of the items - as it is, their taste just about did the presentation justice - the pork chop was a tough piece of underseasoned, grilled meat; the sausage barely any better. And seriously, given the lack of ANY dressing or garnish on the plates (would it kill them to include even just a small salad?!), could the waiter not have said, I dunno, maybe something like "Would you like to order a side or two as the dishes come with absolutely nothing else"?! 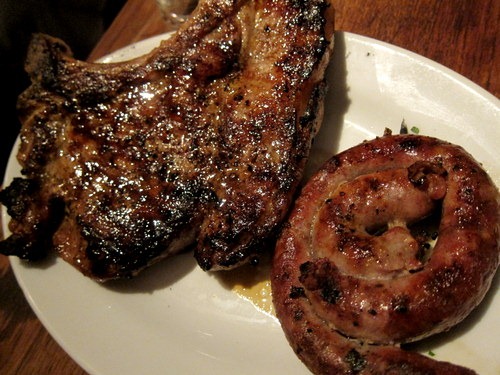 We concluded proceedings by sharing a Torta Caprese 'sanguinello' - layered chocolate & blood orange almond cake which we really shouldn't have bothered with - it was far too dry and much too dense. Ugh. 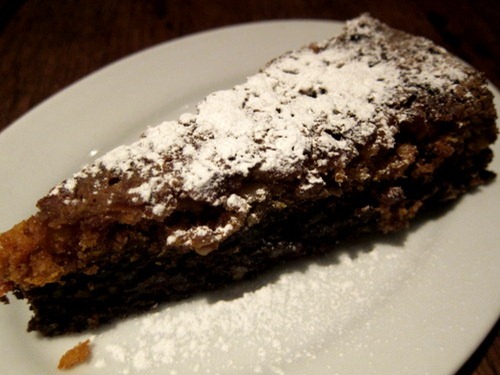 In a nutshell...
It's not at all unusual for critically acclaimed restaurants to fail to live up to the hype. In fact, it happens more often than not. But Bocca Di Lupo still managed to break new ground - by how far it fell below expectations. Distinctly below-average food, poor service and absolutely appalling presentation makes me wish I had waited even longer than the three and a half years I left it to try this place - longer as in forever.