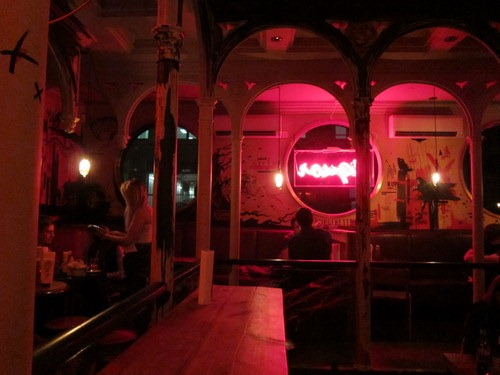 Meatwagon, the brainchild of Yianni Papoutsis and Scott Collins, was the burger van that inspired dozens of blog posts and a cult following, leading to a pop-up restaurant, #MEATEASY, in New Cross where the hype only grew stronger. To many a knowledgeable judge, this was, beyond any doubt, the best burger in town. I never made it down to either the van or the pop-up, but now that the Meatwagon burger had finally landed at a permanent spot, I had to give it a try.

MEATliquor, conveniently located just behind Debenhams on Oxford Street is a dark and dingy venue - a very typical American bar scene, complete with red "mood" lighting. By all accounts, the place gets absolutely rammed at peak times, with queues going around the block - the restaurant operates a no reservation policy – but I visited early evening, in the inbetween zone, and was able to walk straight in. My choice from the menu was a simple one - the Meatwagon Classic, the cheeseburger, and a Chilli Cheese Fries. 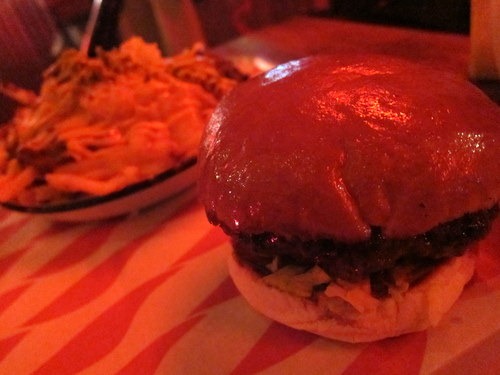 The burger, a bit on the small side, especially alongside the humongous chilli cheese fries, was a lathering mess - no complaints about dryness or the lack of a special sauce here! That's not to say that I didn't have any other complaints - I mean c'mon, it's me! I joke, of course - I might complain often, but it's never (I hope) without basis. On this occasion, my displeasure started with the meat - though reasonably well cooked in the middle, the edges were burnt to a crisp and seriously hard in places. The bun held together well, despite the moisture, and unlike the Hawksmoor Burger, but it lacked softness as a result. I realise there is a fine balancing act between something so soft that is just disintegrates a la Hawksmoor, and something that absorbs any and all moisture but requires a hammer to get through, and MEATliquor certainly did a better balancing job than the aforementioned Hawksmoor, but the bread at both Goodman and Bar Boulud was better, for my money. The sauce also left something to be desired. Yes, it did add moisture, which was good, but didn't exactly deliver on flavour - compare it to, yes here I go again, the Shake Sauce at New York's Shake Shack and the difference was night and day.

The chilli cheese fries, on the other hand, were very good, thanks to the delicious spicy ground beef chilli. It was one of those things you know isn't particularly good for you, but once you've started, you just can't stop. 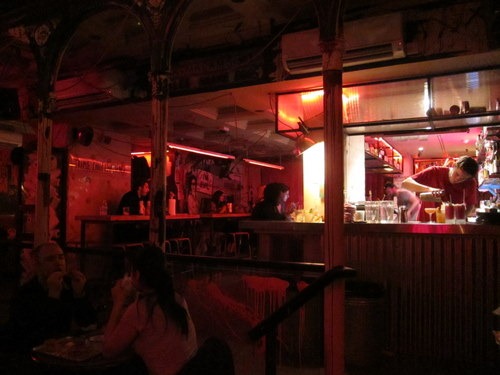 In a nutshell...
MEATliquor was a letdown. It wasn't a bad burger by any means, but it certainly wasn't the best, or anywhere close. Would I go again? Sure. Would I queue for an hour, as is apparently not uncommon? Hells no!